Spyfall was the two-part opening story to series 12 of Doctor Who. It saw the Thirteenth Doctor and company team up with MI6, and re-introduced the Master, now in a new incarnation played by Sacha Dhawan.

The Doctor’s home planet Gallifrey also made a return, having not been seen since the Twelfth Doctor ran away once more in Hell Bent, with the Citadel now in ruins at the Master’s hand. In an ongoing story arc, the Master reveals that he has uncovered a secret about the Time Lords’ history, connected to the Timeless Child.

The two-parter also saw two classic series features making a return: the Master’s Tissue Compression Eliminator, and the Time Lord psychic link “contact”, which the Doctor and the Master once again use to communicate telepathically.

The episode opens with a cold open featuring a series of scenes involving what appears to be secret agents out on missions around the world. Each of them are taken and/or killed by a strange lifeform we’ve never seen before.

When the episode continues after the opening theme, The Doctor’s companions, or “fam” as we’ve come to know them, are carrying out their normal lives away from the TARDIS. This is a fantastic sequence in which we see how each of them has been coping after their original adventures with The Doctor. Ryan is playing basketball with his friends, Yaz is spending time with her family while juggling her job, and Graham is in for a regular medical checkup. They are soon each picked up by mysterious men wearing black suits.

Next, we find The Doctor who, in glorious fashion, is working on the TARDIS. In a garage. With the TARDIS on a lift. It is a classic gender-swap featuring a woman in the role of a greasy mechanic, and I am here for it. While calling her friends to inform them they are late for their return to the TARDIS, she is greeted by the same men in black that picked up the others. Graham sticks his head out of the window to proclaim that it is the worst Uber ever.

After the driver of their car is incinerated and the car tries to murder the crew, they are informed they were meant to be taken to MI6, where they are greeted by its head, an agent called “C”. Now, at this point, it is obvious the episode is meant to pay homage to the James Bond franchise, but it’s just getting started. C informs them that agents from agencies around the world are being put into comas and having their DNA rewritten, or rather, erased entirely. C gives them briefcases filled with spy gadgets to help them in saving the Earth. It is during this meeting that The Doctor reaches out to “O”, an ex-agent of MI6 who was fired for believing in alien life (I know, right?). Also, C is killed and the crew is chased into the TARDIS by our mysterious lifeforms. One of these lifeforms even manages to phase into the TARDIS itself, terrifying the Doctor who has absolutely no idea what they are. The crew splits up to follow separate objectives.

Yaz and Ryan take the identities of a reporter and photographer to interview Daniel Barton, the CEO of a giant tech corporation in San Francisco, where they find out he is not only a giant jerk, but only 93% human. They hang around to snoop in his office after hours where they discover he is in league with the mysterious lifeforms we saw before. These lifeforms ambush Ryan and Yaz and transport her away. 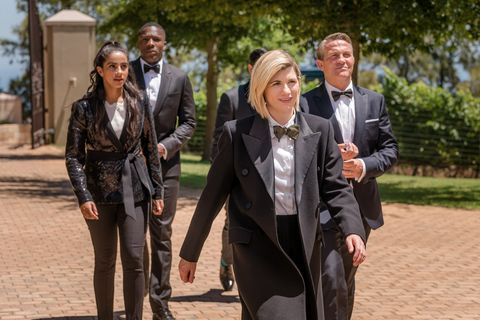 Meanwhile, the Doctor and Graham arrive in the Australian Outback where they meet with O. He explains he has been monitoring the chatter and knows about what is happening with the agents. The lifeforms, who take on a humanoid form and are made of light, attack his home. They manage to trap it and interrogate it. It tells them they want to take over the universe and are from a different universe before the creature disappears and Yaz appears in its place. They get a call from a terrified Ryan and they go pick him up from San Francisco.

Once together, they crash Barton’s birthday party. It is a casino theme with cocktail dress requirement. The crew arrives in tuxedos to spy music. Very Bond. Love it. Once they reveal their hand (speaking of which, there are some very humorous scenes involving casino card games at the party), Barton leaves in a car. In true Bond fashion, the crew follows him on motorcycles.

After an action-packed chase through a vineyard, they follow him to an airport hangar where he boards his private plane. They chase it down and enter the plane through the cargo bay. O mentions he was never good at sprinting… whoops…

Once aboard, the Doctor tells him his file states he was a champion sprinter. “Caught me.” 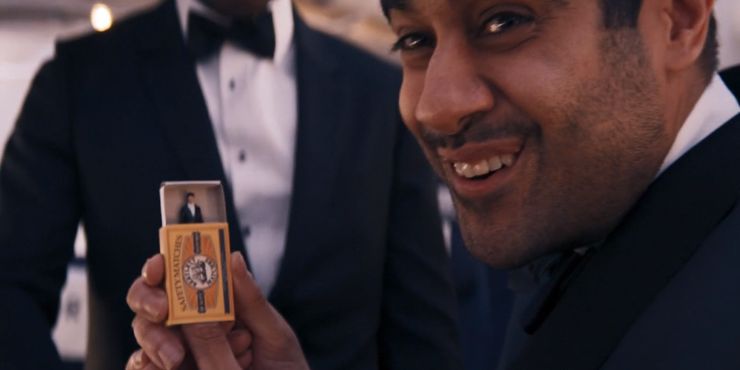 O reveals that he is The Master! WHAT?!?! Out of nowhere, he reveals that he ambushed O on his first day of work and miniaturized him. He has been keeping him in his pocket for decades in a matchbox. It was actually the Master that has been texting with the Doctor for all this time! He uses a bomb to blow up the cockpit of the plane and disappear with the mysterious lifeforms, who also transport the Doctor to a strange universe and leave the rest of the crew to plummet to their deaths…

We pick up right where we left off. The Doctor is trapped in a strange landscape where she meets a woman dressed in 19th century garb. She states she has been brought there multiple times by the lifeforms, whom she calls her Guardians. When she is being brought back to reality, she convinces the Doctor to take her hand, which brings her back into reality… 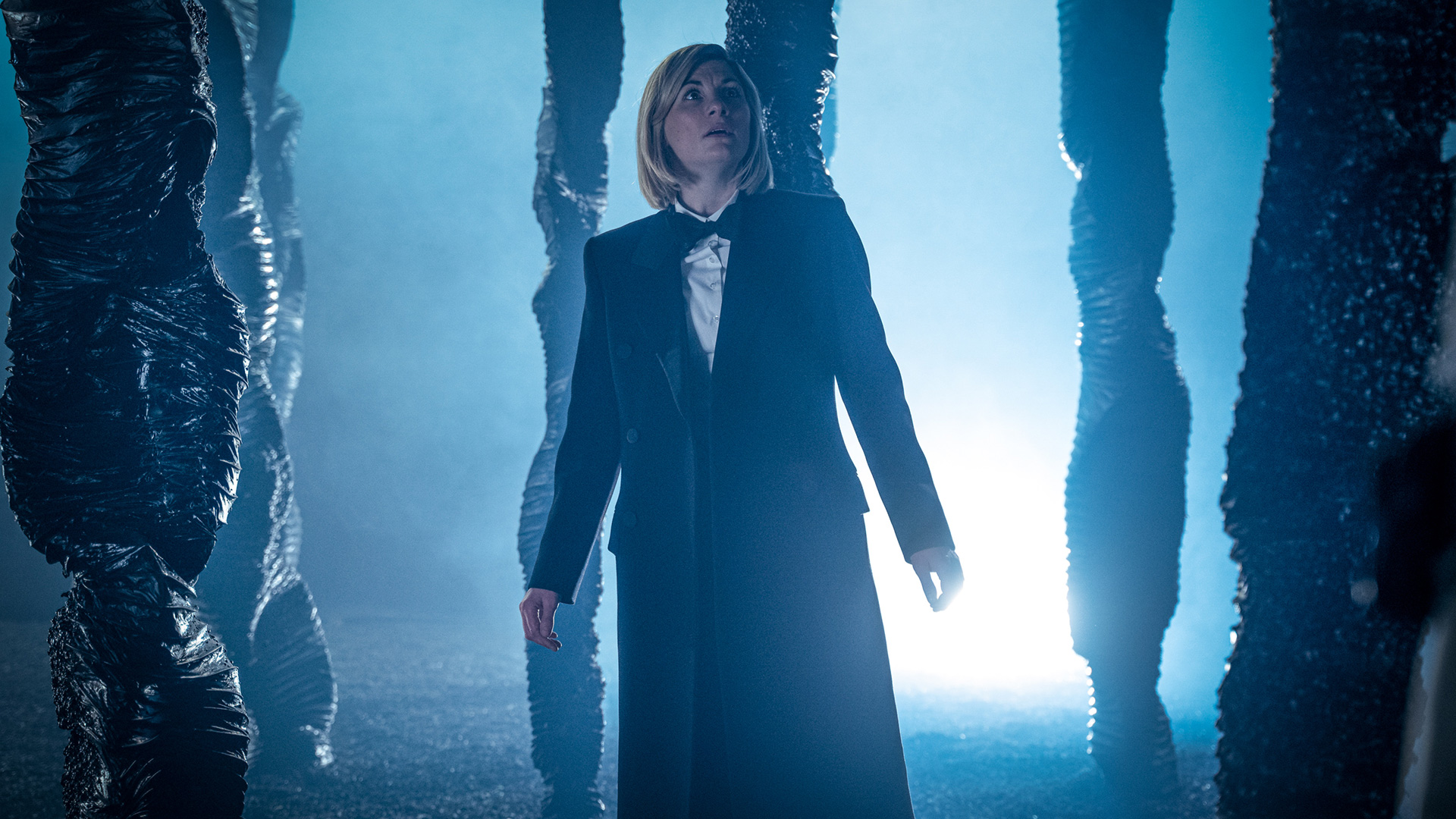 Meanwhile, the crew is back on the crashing plane. Ryan discovers a series of plaques with his name on them that direct him to random instructions put there by the Doctor. The instructions direct them how to connect his phone to the plane itself. This initiates a video recording of the Doctor explaining how to fly the plane with an app. Yikes. They’re able to land safely.

The Doctor and Ada arrive in 1843, in an inventor’s convention. She’s trapped without a TARDIS. Back in the present, the crew vow to follow through and stop whatever Barton has been planning. Laser shoes, everyone. Laser. Shoes.

Anyway, back in 1843, The Master shows up and jut starts shrinking people left and right until they all kneel before him. He also, in a particularly unsettling visual, forces the Doctor to kneel before him. This imagery of a man forcing a woman to her knees in front of him and call him “Master” was problematic and unsettling. The Master might have done the same if the Doctor was a man in this scene, but the fact the Doctor is currently a woman added an extra “ick” factor to the whole thing…

Anyway, he teases he has news from home before being shot and forced away by Ada. We are also given the name of our mysterious alien lifeforms: The Kasarvan. After this ordeal, it is revealed that Ada is Ada Lovelace, the mother of modern computing. The Doctor also discovers the method by which the Kasarvan are moving between universes. She manipulates them into taking her back into the future, but only to France, 1943. Ada grabs her hand to follow.

In 1943 France, with the help of a British spy, the Doctor tricks the Master into a conversation atop the Eiffel Tower. In this conversation, he reveals he has returned to Gallifrey and it is gone. Destroyed. Someone has killed everyone. Using a trick to make the Nazis arrest the Master, the Doctor leaves him to steal his TARDIS, which brings her back into the present.

Meanwhile, Barton was using the Kasarvan to turn all of humanity into hard drives for data storage. At the last second, the Doctor arrives to activate a failsafe in the Kasarvan device and banish them to their own dimension. When Ryan reminds her about how they escaped the plane, she rushes off to make sure to create the video and instructions.

After creating the escape, she remembers what the Master said about Gallifrey and decides to go check his story. When she arrives on Gallifrey she confirms it. Everything is gone. The citadel is burned and destroyed. Everyone is dead. She returns, depressed, to her TARDIS.

Inside, she finds a message from the Master. In the message, he tells her he was the one who destroyed Gallifrey. He did it because he was angry. He hated them for something he discovered. He tells her everything they know is a lie told by the founders of the Citadel. The lies have something to do with the “Timeless Child”, but refuses to give her more information. He leaves her to discover the truth on her own.

Finally, she picks up her friends and prepares to leave for more adventures. She finally explains to them who she is and where she comes from, but hides her true mission. Something tells me that will be a source for contention later…